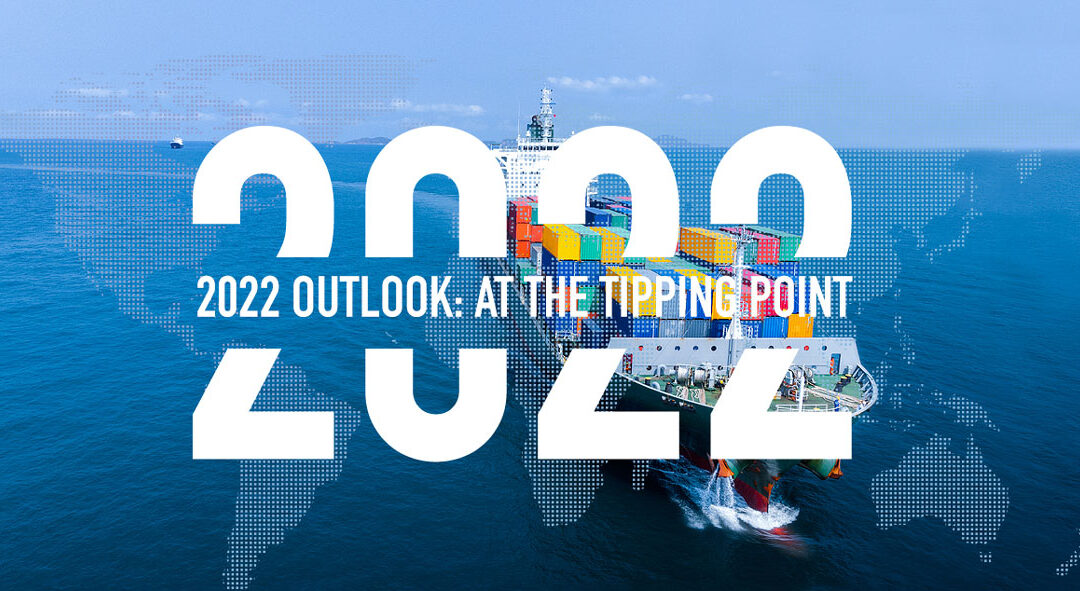 2022 will almost definitely be an eventful year for trade, regardless of how it pans out. One of the first indications of direction of travel may be the Lunar New Year holiday in Asia, traditionally when factories (and thus exports) slow down.

In 2022, this may give carriers, ports and other logistics participants time to clear out some of the congestion that has been plaguing supply chains ever since the start of the pandemic. If import levels are similar to early 2019, rather than 2021, it may signal that the worst of the congestion is over. 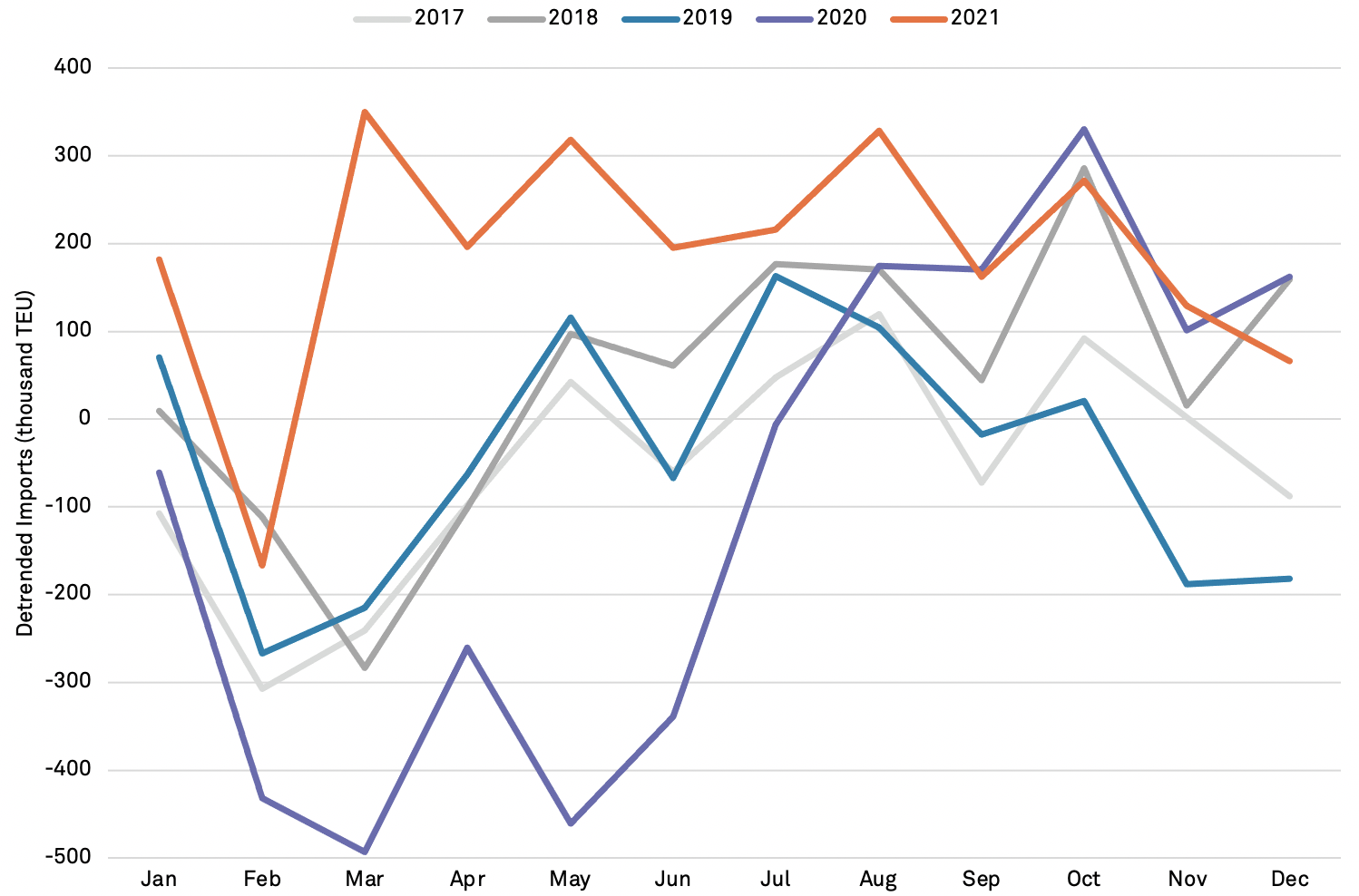 The base case scenario is that the logistics environment is similar to 2021. Built-up congestion, paired with rising inflation, could create a vicious cycle in which companies are incentivized to try to secure supplies at all cost — over ordering and paying more. In time, these costs will most probably be passed on to consumers, causing additional wage pressure, and so on.

Continued COVID-19 outbreaks, especially those caused by the omicron variant of the coronavirus, will likely hinder efforts by companies and ports to remain operating at elevated levels, as seen in the recent restrictions at the port of Ningbo, Zhejiang Province, China.

If the same stories keep repeating, companies are likely to continue to ramp up inventories as well, as many have already done. Of the Russell 3000 companies, automotive firms have led their goods-focused fellows in this regard, having increased inventory 37.4% year over year in the third quarter. 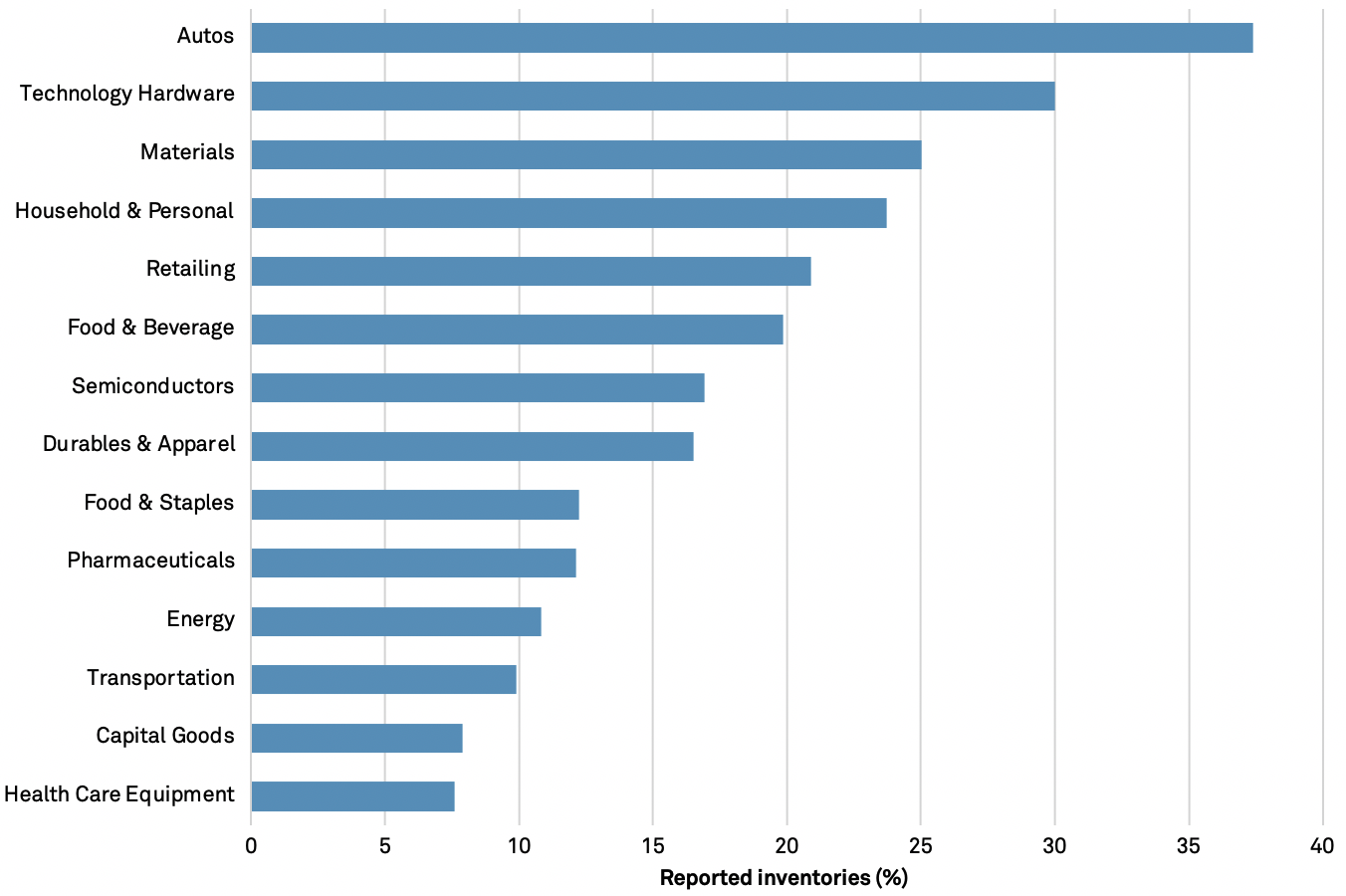 Chart shows reported Q3 inventories of companies in the Russell 3000 by GICS4 on a quarterly year over year basis.

A worse case for shippers is that additional events increase logistics congestion, or even shut down supply chains entirely. A prime candidate for such an event is the historically fraught negotiation of labor contracts at the West Coast ports of Los Angeles and Long Beach, Calif., scheduled this year.

A slowdown or strike at the ports, which handled 32.0% of U.S. seaborne imports by volume in 2021, would be devastating to logistics networks, forcing companies to attempt shipping through already-overburdened secondary ports or to try to wait out the disruption. Either way, it could well boost congestion back to unworkable levels.

Meanwhile, trade rhetoric between the United States and China has been intensifying, with actions such as the former’s banning of imports from Xinjiang or the latter’s application to join the Comprehensive and Progressive Agreement for Trans-Pacific Partnership having the potential to escalate into larger grievances between the two countries. China accounted for 40.3% of U.S. imports in 2021, and a resumption of the trade war could put supply chains in a bind. 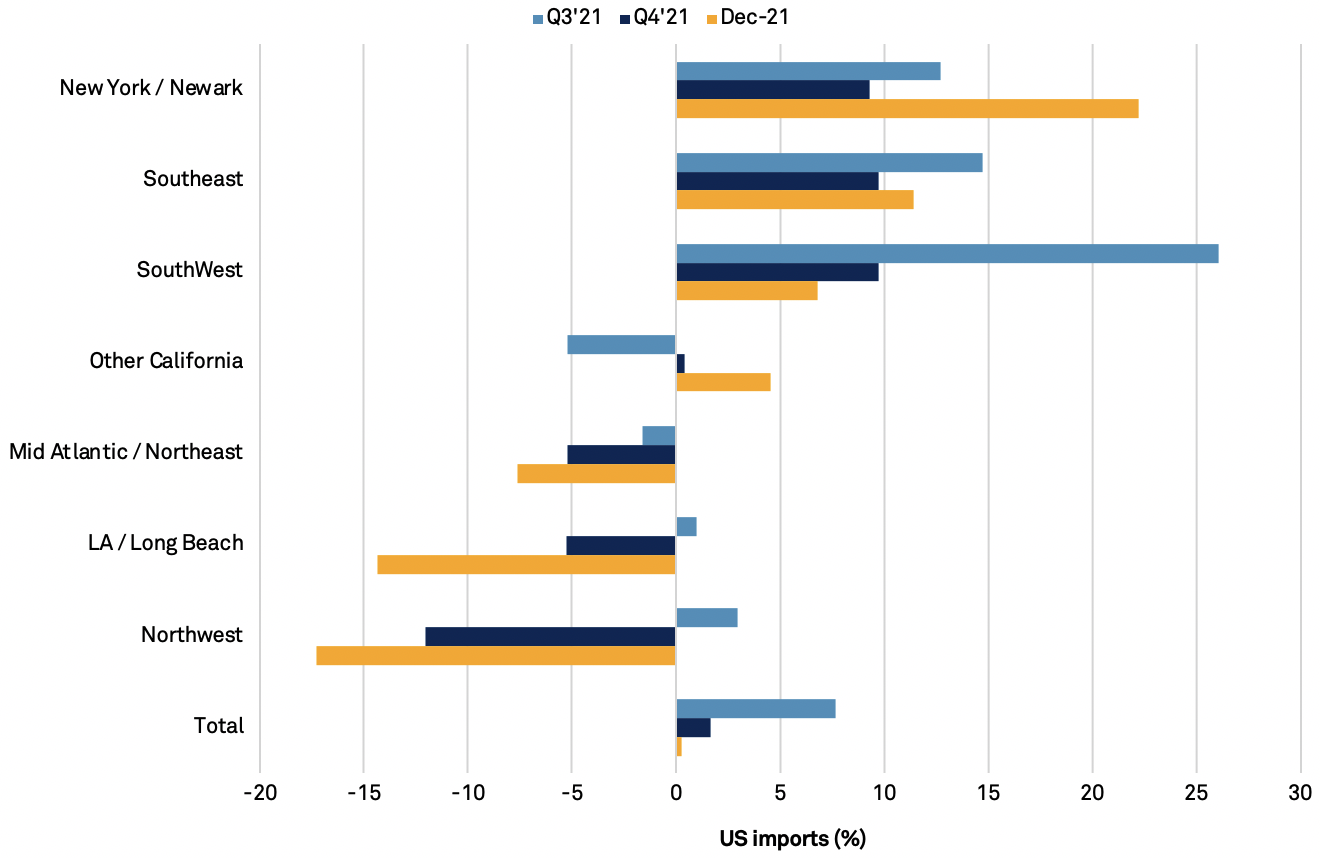 U.S. imports by TEU including reexports by port on a quarterly year over year basis.

There are some events that could bode well for supply chains in 2022, including continued efforts by ports to clear congestion using financial incentives. The Port of Los Angeles implemented one such fee in late 2021, which generated enough response that it delayed the actual assignment of charges.

Increased digitization of logistics networks could also add additional capacity to systems through increased efficiencies such as the reduction of downtime. If a large nearshoring trend utilizing U.S. trade partners in Mexico and Canada fully materializes, it could also help to alleviate seaborne congestion (although putting more pressure on trucking).

Any improvement in metrics such as reliability and transit time would likely be bittersweet for carriers, however, who have enjoyed high profits over the past year. Those of Matson Inc., for example, increased 282.7% year over year, an almost definitely unsustainable growth rate if rates return to 2019 levels. 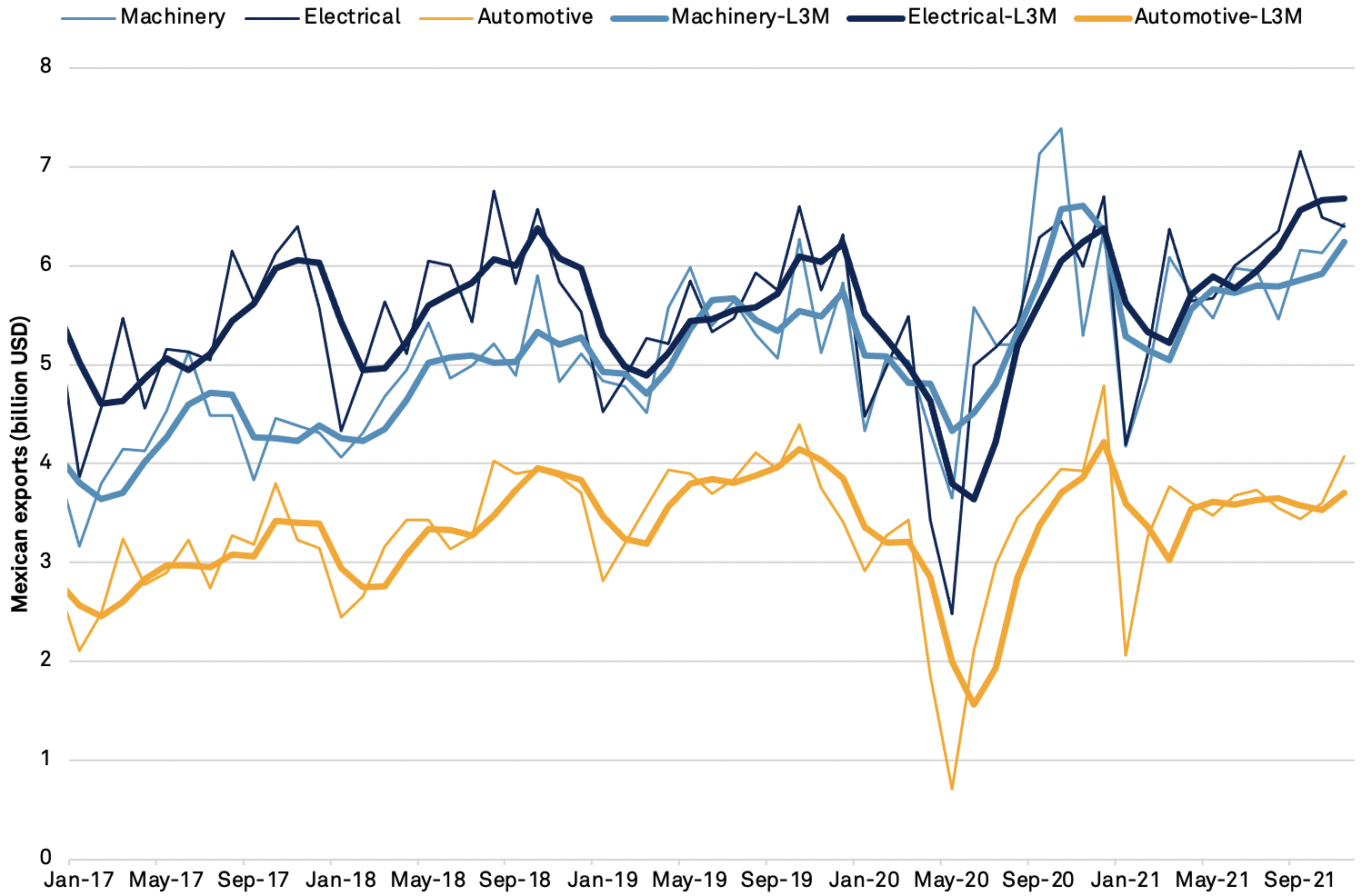 Mexican exports to the U.S. by truck on a monthly and three-month average basis.

China has increased restrictions around the port of Ningbo, Zhejiang Province, as a response to outbreaks of COVID-19 in the surrounding city. Carrier A.P. Møller – Mærsk A/S also issued an advisory outlining that three of the five terminals faced restrictions on entry and exit, but that loading and unloading operations were continuing as normal. This could impact companies that ship through the port, which has increased its share of U.S. seaborne imports relative to other major Chinese ports since the start of the pandemic.

In the third quarter, its volumes to the U.S. were 40.0% above the equivalent quarter in 2019. Growth in October and November combined was 2.6% year over year, meaning Ningbo handled 7.6% of U.S. seaborne imports in the first 11 months of 2021. The volumes of the ports of Shanghai and Yantian (which handled 10.4% and 10.7% of U.S. seaborne imports respectively in the same 11-month period) fell 0.1% and 3.9% year over year respectively in October and November combined. 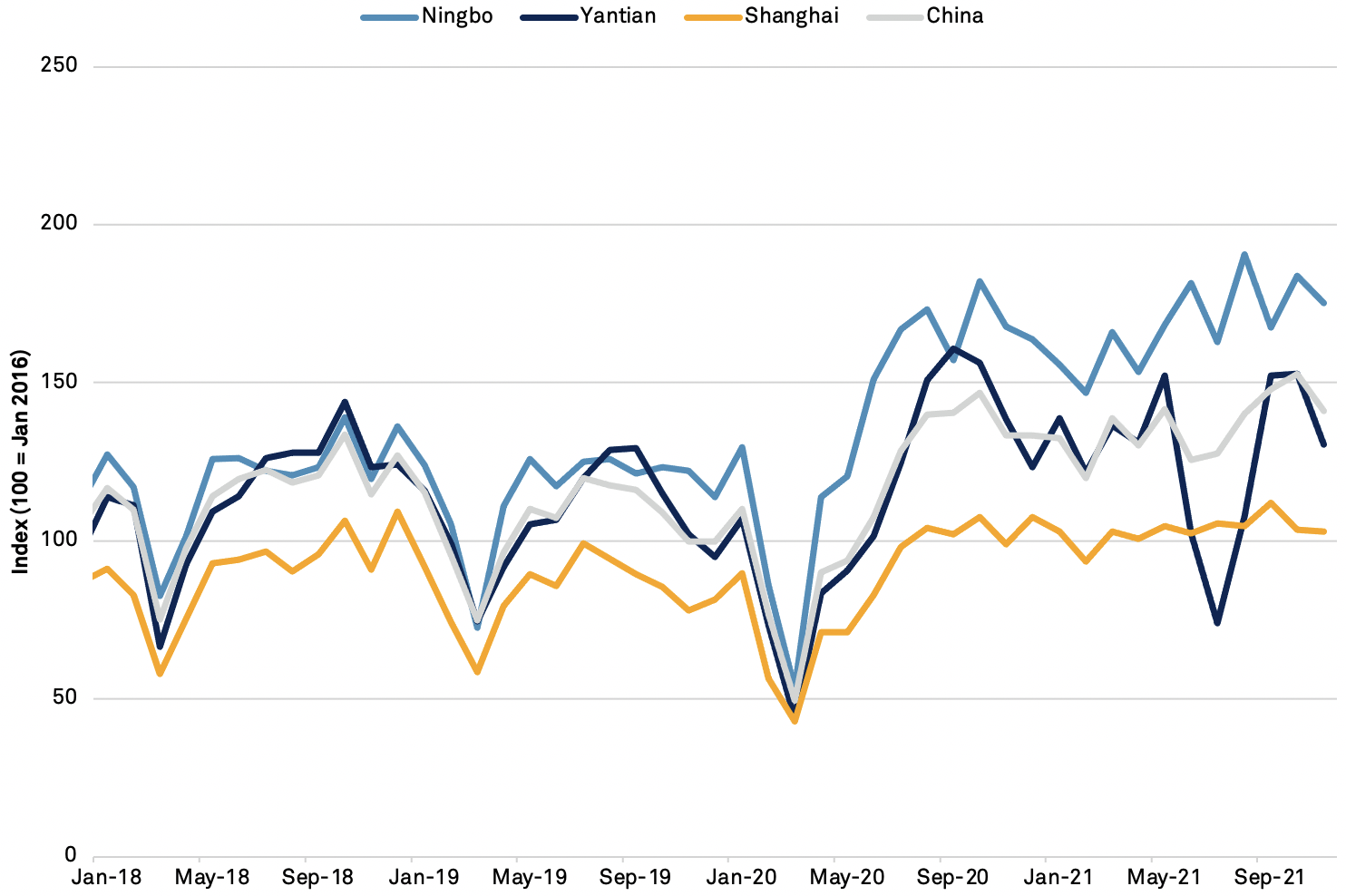 U.S. seaborne imports loaded in Ningbo, Yantian, and Shanghai, and from China as a whole on a monthly basis, indexed to January 2016.

Panjiva data shows which North American companies received goods from the affected area. Imports from a 50-kilometer circle centered on the Beilun District in Ningbo that are associated with retailers Goplus Corp. and Dollarama Inc. and auto parts importer Advanced Innovative Manufacturing Inc. totaled 2,226, 6,037 and 4,609 twenty-foot equivalent units respectively in the first 11 months of 2021.

The imports of GoPlus and Dollarama from the region declined 53.7% and 6.6% year over year respectively in October and November combined. If the firms were already shifting sourcing they may be less impacted by the restrictions. The data shows the opposite for Advanced Innovative Manufacturing, the imports of which increased 50.3% year over year in the same period. The new restrictions may become headwinds on that growth. 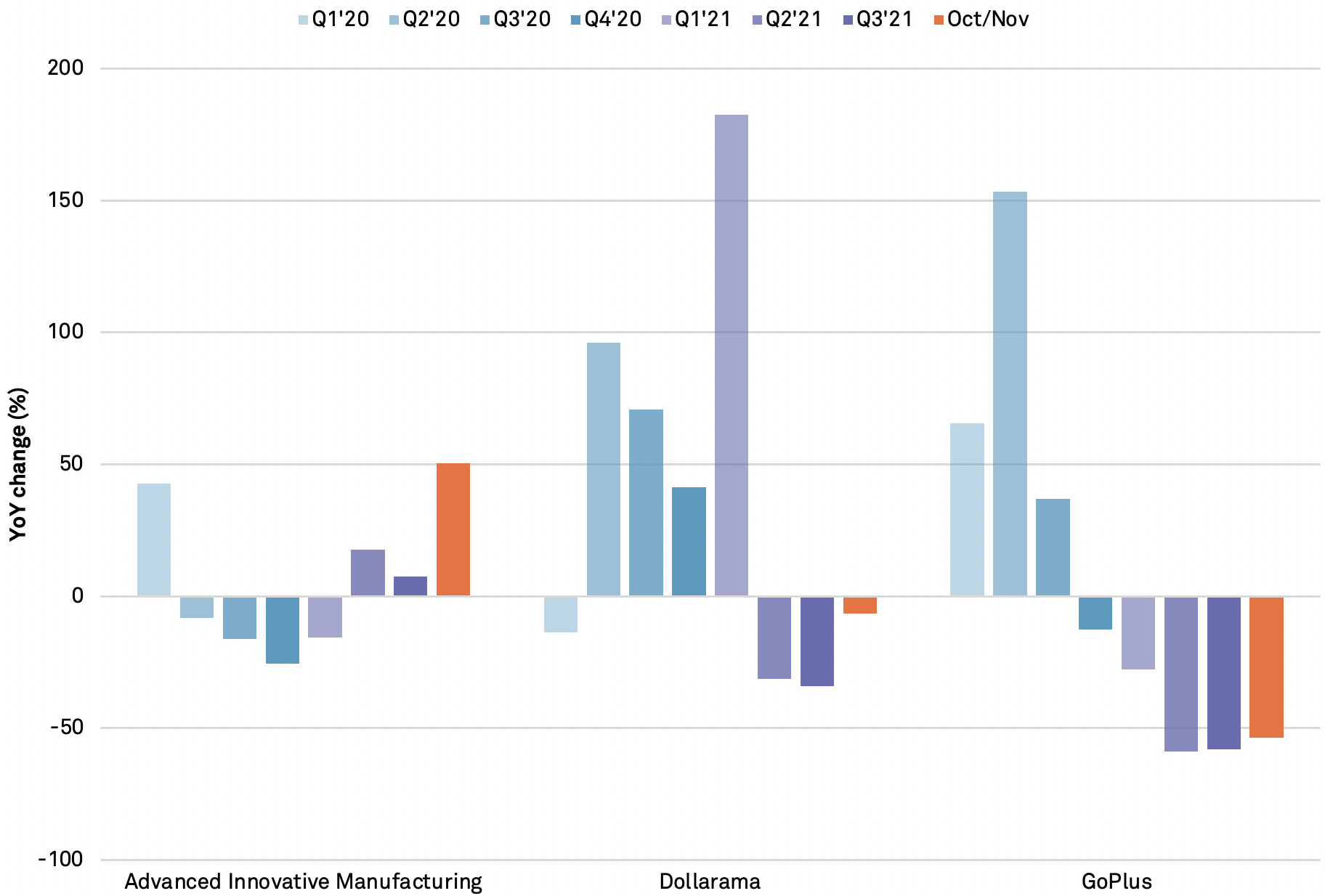 Imports from an area 50km from the Beilun District of Ningbo.

Resourceful and innovative Marketing Pro, with 20+ years of progressive experience in the marketing and creative technology industry. Responsible for digital and traditional marketing efforts that promotes brand awareness, increases engagement, and drives revenue.
← Strategic Sourcing in the New EconomyActivity based costing (ABC) →