Metal casting is a dominant process in the manufacturing industry for producing metal parts in many different shapes, sizes and materials. There are several different casting processes including the primary methods of sand casting, investment casting and die casting. 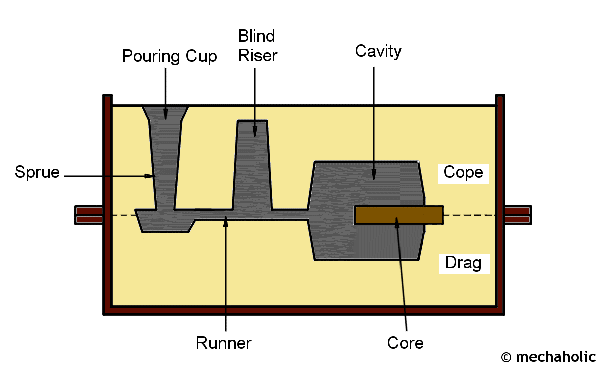 Sand casting is a process that uses a cope and drag to form a sand pattern that resembles the shape of the part that is being cast. This process is known as an expendable mold process since the sand mold is broken apart and destroyed once the metal part is cast inside of it and subsequently removed from it. The sand casting process uses molten metal which is poured into the sand pattern to fill the void in the sand created by the core. The casting is cooled so the part solidifies, the pattern is opened up, the part is removed and the sand pattern is broken down and usually recycled. 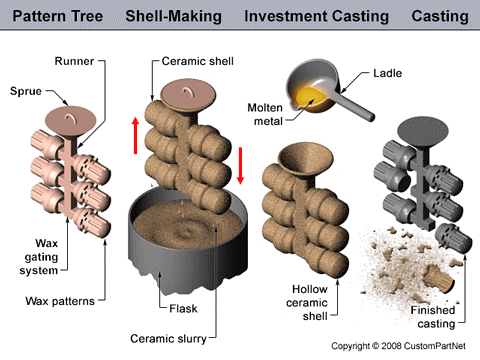 Investment casting is also known as a lost wax casting process because the pattern is actually made out of a ceramic material formed around wax material that replicates the part or parts being cast. The wax material is melted away from the pattern prior to pouring the molten metal into the mold. Because the mold is formed around the entire wax pattern, investment cast parts can be extremely intricate designs including very thin cross sections. 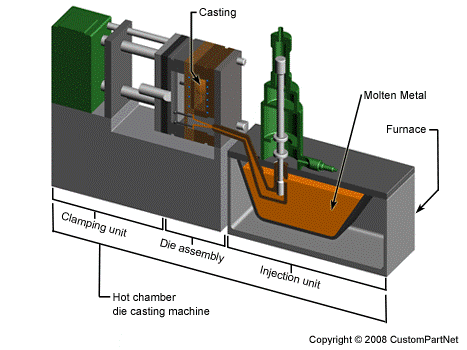 Die casting is another type of process that is called a “permanent mold” process because the mold is reused while molding from part to part. As the name suggests, this process uses a hard die into which liquid metal is injected under pressure to form the part being made. Once the metal is injected into the die, it is cooled to harden, the die is opened up and the part is ejected from the die. While the die costs more to manufacture initially, it is very cost effective over time compared to sand or investment casting because it is reusable and very fast.

Contact Mechanical Power, a Global Sourcing Company, to talk to an investment casting & die casting professional about taking the hassle out of global sourcing for your company today.